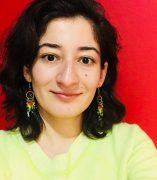 Junaid Quadri, Zukhra Kasimova (translation), “The Influence of Shihabuddin Mardjani on the Hanafism of the Middle East and South Asia”, in Journal for the Studies of Islam and Muslim Societies, Vol 9, No 1-2 (2019).

2020, History Department John B. and Theta Wolf Fellowship, University of Illinois at Chicago

2019, Award for Graduate Research (AGR), University of Illinois at Chicago

“At the Center of Periphery: Igor Savitsky’s Collection of Soviet Avant-garde Art in the Karakalpak Desert” at the University of Illinois at Chicago (UIC), History Department Brown Bag Talk, November 14, 2018.

“Savitsky's collection in Soviet Karakalpak Autonomous republic: An Idiosyncratic Museum” at the International Council for Central and East European Studies (ICCEES) 2020 World Congress in Montreal, Canada, August 4-9, 2020 (rescheduled to August 2021 due to Covid-19).

“Soviet modernity in the Karakalpak Desert through the case of Igor Savitsky's Art Museum in Nukus” at the Central Eurasian Studies Association (CESS) Regional Conference in Tashkent, Uzbekistan, June 25-28, 2020 (rescheduled to Summer 2021 due to Covid-19).

“Hybrid Central Asian Identities: From Moscow to Tashkent and then to Nukus” at the 24th Annual Association for Study of Nationalities (ASN) World Convention, Harriman Institute Columbia U, New York, NY, May 3, 2019.

“Displaced Soviet Children during the Great Patriotic War in Uzbek SSR: Experiences of Evacuation” at the Annual CESS Convention in Pittsburg, PA, October 28, 2018.

“Adoption and Adaptation in Uzbek SSR during the Great Patriotic War: The Friendship of The Peoples as a hierarchical discourse” at the Midwest Slavic Conference on Migration at Ohio State University, Columbus, OH, March 25, 2018.

“(R)Evolution of the Soviet-Muslim discourse in local Uzbek and Russian language newspapers from 1920s to the Great purges” at the Interdisciplinary Approaches to Russia, Eastern Europe, and Central Asia (REECA) Workshop, University of Chicago, IL, November 17, 2017.

CURRENT RESEARCH: In her dissertation project, Kasimova argues that Soviet modernity was essentially a hybrid concept. Within this framework, Central Asia as a region ceases being a periphery of the Soviet world and becomes central for understanding processes of hybridization of Soviet modernity. Kasimova’s project is aimed at decentering Eurocentric narratives of modernity. Her Soviet modernity is multi-lingual; it allows a place for the persistence of Islam in the region (as both religion and cultural text); and it implies active role of local elites in [re]shaping messages and policies of the center and directly influencing them. The project also explores the heterogeneous nature of the Central Asian region itself, highlighting its internal social, gender and national stratifications and conflicts that defying any binary explanations and oppositions. By focusing on specific cases of human and institutional contacts, interactions and competitions, Kasimova plans to show how the post-WWII global reshaping of Uzbekistan as a Soviet national republic produced spaces of relative freedom that allowed imagining and exercising modernity in terms contradictory to official Soviet politics and discourses. On the other hand, Kasimova claims that the hybrid Uzbek modernity decisively influenced the normative Soviet project – by carving in it a place for “Muslim” cultural identification, a concept of national science, toleration of “national” traditionalism (as, for example, exemplified by extended Uzbek families that adopted evacuated children from “European” Russia and made them linguistically and culturally Uzbek), and so on.