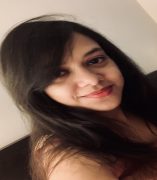 Sohini is a doctoral candidate, working on postcolonial migration after the partition of colonial India in 1947, with a specific focus on Bengal. Born and raised in the city of Calcutta, Sohini is interested in understanding the relationship between partition, border making, migration, and citizenship in daily lives of South Asians. In her MPhil thesis, Sohini examined communal politics and patterns of violence in colonial Calcutta in the late 1940s. Currently, Sohini is interested in exploring the everyday socio-political transformations that came with the end of the British Empire and the formation of new nation-states in South Asia.

Courses Taught: Teaching Assistant at the University of Illinois at Chicago, 2016 to 2020.

Contesting the National: Bengali Muslims and Multiple Forms of Belonging in Postcolonial South Asia," 13th Annual Graduate History Symposium on Canada 150: Defining the Nation in a Transnational World, May 2017

I am working on late colonial and early postcolonial migration in South Asia (specifically Bengal) to understand how independence and partition of British India transformed everyday life and produced contesting ways of belonging to a nation.