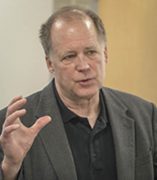 After a long stint in the working world, John Abbott resumed his undergraduate studies at UIC, taking his degree there in history in 1987. He then continued his studies at UIC, gaining his MA and Ph.D. in Modern European History. His dissertation, "Peasants in the Rural Public: the Bavarian Bauernbund, 1893 to 1933," focused on cultural change, anti-clericalism and political mobilization in the Bavarian countryside from the latter nineteenth through the early twentieth centuries. After teaching at several Chicago-area universities, he arrived at UIC in 2010; he has taught there since, winning several teaching awards along the way. His current research focuses on the Bavarian Revolution of 1918/19, specifically on the role of war and revolution in shaping German collective memory during the Weimar Republic.