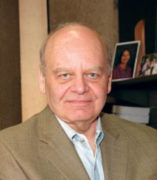 James Cracraft taught graduate and undergraduate courses on Russian and Modern European history, on Russian-American relations, and on historiography and historical methods, until 2010.  During his time at UIC he also supervised six PhD dissertations, presented papers at numerous scholarly conferences, and served as outside referee in tenure and promotion cases at other universities or as external reviewer of their academic programs.  He was also a visiting professor at Northwestern University and the University of Chicago, regularly evaluated submissions to scholarly journals, university presses, and grant foundations, and frequently spoke on international topics to civic, educational, church, and professional audiences as well as on radio and TV.  He published dozens of book-chapters, articles, and reviews as well as ten books; his The Revolution of Peter the Great (Harvard University Press paperback, 2006) is a digest of his most important work.  In addition to numerous smaller grants, his research was supported by fellowships from the National Endowment for the Humanities (twice), the Davis Center for Russian Studies, Harvard University, the John D. & Catherine T. MacArthur Foundation, the Kennan Institute of the Woodrow Wilson International Center for Scholars, and the J. S. Guggenheim Memorial Foundation.  He won the History Department’s annual Shirley Bill Award for Outstanding Teaching three times, and the Silver Circle Award for Teaching Excellence, conferred annually by vote of the graduating seniors of the College of Liberal Arts and Sciences, twice (three times a finalist).  In 1998 he was appointed a University Scholar “for distinction as a member of the faculty of the University of Illinois.”