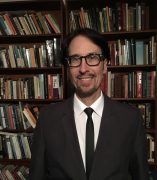 Jonathan Daly teaches Russian, European, and world history, focusing on Western Civilization’s shaping of the modern world and the unequal struggle between the Russian state and society.

His books, Autocracy under Siege (Northern Illinois University Press, 1998) and The Watchful State (Northern Illinois University Press, 2004), examines confrontations between revolutionaries and the security police in Russia before 1917. Daly compiled Russia in War and Revolution, 1914-1922: A Documentary History (Hackett Publishing Company, 2009) and The Russian Revolution and Its Global Impact: A Short History with Documents (Hackett Publishing Company, 2017) with his former Ph.D. student, Leonid Trofimov, for use in teaching. Currently, Trofimov and Daly are writing a book entitled "Seven Myths of the Russian Revolution" (for Hackett Publishing Company)

The Rise of Western Power: A Comparative History of Western Civilization (Bloomsbury, 2014) interprets the West’s rise to world preeminence. Historians Debate the Rise of the West (Routledge, 2015) summarizes the arguments of two dozen scholars. How Europe Made the Modern World: Creating the Great Divergence (Bloomsbury, 2020) sums up Daly's latest thinking about the rise of the West. He is also completing revisions to the second edition of The Rise of Western Power.

Hammer, Sickle, and Soil: The Soviet Drive to Collectivize Agriculture (Hoover Institution Press, 2017) tells the harrowing story of Stalin's transformation of millions of family farms throughout the USSR into 250,000 collective farms during the period from 1929 to 1933. Daly’s Crime and Punishment in Russia: A Comparative History from Peter the Great to Vladimir Putin (Bloomsbury, 2018) provides an overview of the evolution of the system of criminal justice during the past three centuries in Russia.

He is enthusiastic about working with graduate students on late Imperial and early Soviet political, institutional, and legal history and historiography.