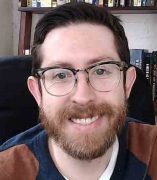 Cory Davis received his doctorate in history from the University of Illinois at Chicago in 2015. His dissertation, “A Merchant’s Republic: The National Board of Trade and Commercial Capitalism in the U.S., 1840-1912,” focused on the history of commercial organizations and their influence on political and economic development in 19th century America. He specializes in the 19th century United States and the history of capitalism and is currently the coordinator of the department’s UIC Global offerings. He has previously taught courses on the American Civil War and early 20th-century social history, as well as survey courses in U.S. and world history. He is currently working on a book proposal for a project with the tentative title of The Republic of Commerce: Merchants and Capitalism in the United States, 1840-1912. In his free time, he enjoys listening to music and cheering on Tottenham Hotspur.