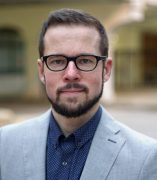 Adam Goodman is an associate professor of history and Latin American and Latino studies at the University of Illinois Chicago, and a 2022-23 Andrew W. Mellon Foundation Fellow at the Center for Advanced Study in the Behavioral Sciences at Stanford University. His interests include migration history, policy, and law; Latino and Mexican American history; border and borderlands; social movements; racial and ethnic identity formation; and recent US, Mexican, and Central American history.

Goodman's award-winning book, The Deportation Machine: America’s Long History of Expelling Immigrants (Princeton UP, 2020), traces the US government’s systematic efforts to expel noncitizens over the past 140 years. It uncovers public officials’ use of force, coercion, and fear to purge immigrants from the country and exert control over those who remain. The book introduces the politicians, bureaucrats, businesspeople, and ordinary citizens who have pushed for and profited from expulsion. It chronicles the devastating human costs of punitive enforcement policies and the innovative strategies people have adopted to fight against removal and redefine belonging in ways that transcend citizenship. The Deportation Machine was a finalist for the Los Angeles Times Book Prize in History and received the PROSE Award in North American History from the Association of American Publishers, the Henry Adams Book Prize from the Society for History in the Federal Government, and Honorable Mention for the Theodore Saloutos Book Award from the Immigration and Ethnic History Society.

Goodman has written articles, essays, and reviews for publications such as the Journal of American History, The Nation, and the Washington Post. He has discussed Latino history and immigration policy in Spanish- and English-language interviews on Latino USA, Univisión, BBC Radio 4, CSPAN’s Book TV, Mexico’s TV UNAM and Canal 22, and BackStory, among other programs and outlets.

Goodman is a co-organizer of the #ImmigrationSyllabus project and a member of the Statue of Liberty-Ellis Island Foundation History Advisory Committee. From 2017 to 2022, he served as a coordinator of the Newberry Library’s Borderlands and Latino/a Studies Seminar. The National Endowment for the Humanities, Fulbright Program, and Immigration and Ethnic History Society have supported his work.

The Deportation Machine: America’s Long History of Expelling Immigrants (Princeton UP, May 2020)

“The DHS Secretary Could Chart a New Path on Immigration. Will He?,” Washington Post, February 2, 2021.

“A Long Series of Uncertainties,” The Nation, Sept. 22, 2014. (essay on Central American refugee crisis and migration)

“How the Mexican Drug Trade Thrives on Free Trade,” The Nation, July 15, 2014. (with Christy Thornton)