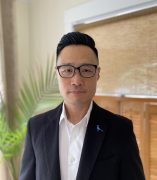 Michael R. Jin holds a joint appointment as an Assistant Professor with the Department of History and the Program in Global Asian Studies. His areas of specialization include migration and diaspora studies, Asian American history, transnational Asia and the Pacific world, and the history of the American West.

His book, Citizens, Immigrants, and the Stateless: A Japanese American Diaspora in the Pacific (Stanford University Press, 2021), recuperates the stories of more than 50,000 U.S.-born Japanese Americans in the former Japanese colonial world in Asia who drew the U.S. West into the larger histories of nations and empires in the Pacific before, during, and after World War II. The book traces the deeply intertwined histories of anti-Asian racism in the American West, Japanese colonialism in Asia, and volatile U.S.-Japan relations that converged in the lives of these American migrants, sojourners, and survivors of war and state violence at the crossroads of the U.S. and Japanese empires.

Jin is an interdisciplinary scholar whose research focuses on comparative and global dimensions of human migration and racial formation that push the conceptual, geographical, and linguistic boundaries of ethnic studies and area studies. His work has been published in the Critical Ethnic Studies Journal, The Routledge Handbook of Asian American Studies, and The Routledge History of U.S. Foreign Relations, among others. His current research documents the experiences of Korean survivors of the nuclear holocaust in Hiroshima and Nagasaki in 1945 that illuminate the legacies of Japanese colonialism, shifting geopolitical dynamics of the Cold War U.S. nuclear umbrella, and the postcolonial politics of redress across the Pacific. His second book project opens a window into the lives of Iranians and Koreans in diaspora and the transnational circuits of change in multiple regions that intersected in their lives. This project explores the unexpected convergence of national histories, shifting immigration policies, and volatile geopolitical upheavals across West Asia, East Asia, and North America.