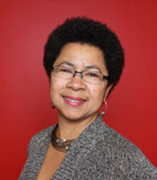 Dr. Barbara Ransby is the John D. MacArthur Chair, and Distinguished Professor, in the Departments of Black Studies, Gender and Women’s Studies, and History at the University of Illinois at Chicago (UIC). She also directs the campus-wide Social Justice Initiative, a project that promotes connections between academics and community organizers doing work on social justice. She is a graduate of Columbia University and the University of Michigan, where she was a Mellon Fellow.
Dr. Ransby is author of two award-winning books: Ella Baker and the Black Freedom Movement: A Radical Democratic Vision (University of North Carolina Press, 2003); and Eslanda: The Large and Unconventional Life of Mrs. Paul Robeson (Yale University Press, 2013). She is also author of a third book published by University of California Press in August 2018 entitled: Making All Black Lives Matter: Re-imagining Freedom in the 21st Century and is presently writing a fourth book (forthcoming, 2022). The Ella Baker book was the recipient of 8 national book awards and recognitions including the Liberty – Legacy award from the Organization of American Historians; the Joan Kelly prize from the American Historical Association; and the James A. Rawley Prize (also from the AHA). In 2018 the Chronicle of Higher Education acknowledged the Baker biography as “one of the most influential books of the last twenty years.” Her second biography, Eslanda, was the recipient of the Letitia Woods Brown Memorial prize for the best book in African American women’s history from the Association of Black Women Historians. In 2017 Dr. Ransby was honored as “one of the top 25 women in higher education,” by the publication, Diverse Issues in Higher Education.
Dr. Ransby is a recipient of the 2018 Angela Y. Davis Prize from the American Studies Association for scholarship in service of the public good. In 2020 Dr. Ransby received two honors. She was elected as a fellow to the Society of American Historians and received one of the inaugural Freedom Scholar’s Award from the Marguerite Casey Foundation and Group Health Foundation for “social and economic justice scholarship.”
She is also editor in chief of Souls: a critical journal of Black politics, culture and society, and is a member of the editorial working group of the London-based journal, Race and Class, and the Editorial Advisory Board of the “Justice, Politics and Power” book series at University of North Carolina Press. She served as President of the National Women’s Studies Association from 2016 to 2018. She also serves on a number of community and editorial boards.
Dr. Ransby publishes regularly in popular venues, which include: DISSENT, In These Times, Colorlines, The Nation, the Boston Review, Truthout, and the New York Times.